It had been on the bucket list for some time – shark diving, that is – and last year we tried to get on a trip from Pacific Harbour without success. In July 2017 we booked at the top-rated dive resort of Beqa (pronounced Benga) Lagoon Resort on Beqa Island for a week.

We overnighted at The Pearl South Pacific Resort at Pacific Harbour, a great place to stay as it sits next to the marina from where our boat would leave. It also offers great views from its breakfast restaurant. A 45-minute boat ride south soon brought us to our home away from home for the next seven days. 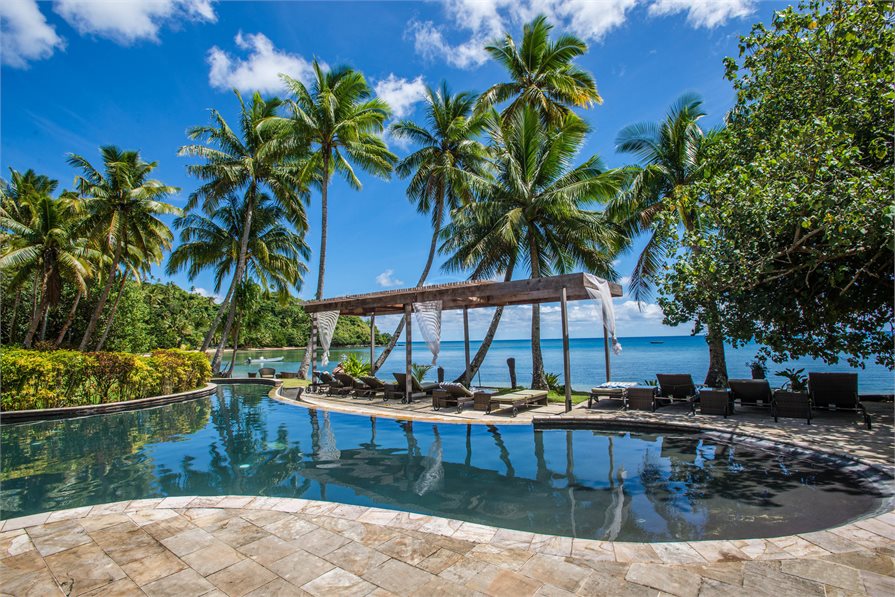 The Beqa Lagoon Resort is not large but is well set up with a beautiful pool adjacent to the beach and restaurant area. Our holiday began with a complimentary foot massage beside the pool – what a great start! Although Beqa Lagoon Resort is essentially aimed at divers it is still a lovely place for non-divers to stay, with daily activities, snorkelling on the nearby reef, and a wonderful open-air spa hidden away in the lush foliage.

After a few days of diving on wrecks, seeing huge sea fans and myriads of fish and turtles it was time for the shark dive trip. Our briefing took place at the resort’s dive shop. We were instructed to obey all the dive team’s signals, stay kneeling on the sandy bottom, not touch the sharks, keep our hands on the rock wall and watch out for moray eels that hide in the rocks.

If a shark came too close we were to push it away with a camera if we had one (we didn’t) or use the palm of our hand (not something I was keen to do!).

If a shark came too close we were to push it away with a camera if we had one (we didn’t) or use the palm of our hand (not something I was keen to do!). Forty minutes later we had arrived at the dive site, donned our gear and over the side we went. Once in the water we gradually moved down the side of the coral reef to a depth of 22 metres.

The crew had built a low coral rock wall and we settled behind this, watching out for the moray eels. In front of us were three dive crew who were going to feed the sharks, plus a crew member at each end of our group, and a couple more crew behind us. It was evident that our safety was their paramount concern.

There were literally thousands of fish of all sizes: rainbow runners, napoleon wrasses, remoras, trigger fish, red snapper – too many to comprehend. The activity stirred up the sand a little and in the distance we could make out darker, larger shapes – bull sharks. About two to three metres long, these were tubby, solid sharks. They reminded me of a group of boys out to make mischief, aggressively targeting the cage of fish remnants that the crew had set out and generally making a nuisance of themselves.

The second shark to turn up was a nurse shark, slower and more graceful, making a leisurely pass over us and around the food cage. Sharks that are seen at this site are lemon sharks, nurse sharks, grey reef sharks, white-tip reef sharks, black-tip reef sharks as well as the tiger sharks. 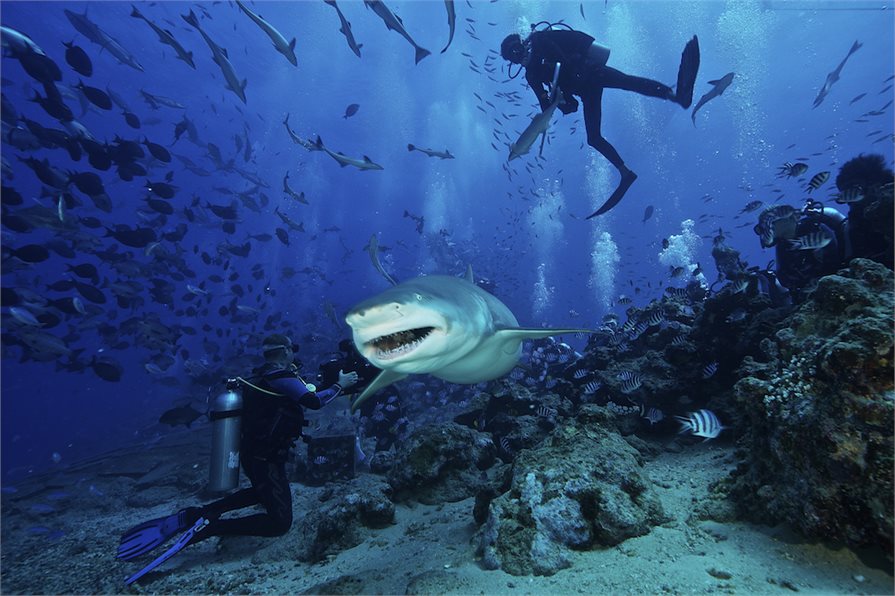 It was soon time to return to the boat, stopping near the surface for a decompression time before getting back on board. Excited divers showed their photos and video clips while the crew handed out juice and banana bread – very tasty and well received.

An hour later and with a change of tanks we were back in the water again and cruising down to the bottom and settling in behind the rock wall. The crew members in front had handy bins full of fish heads and within minutes a grey shape could be seen in the background, slowly swimming ever closer. She was beautiful.

Tiger sharks are the second most dangerous predator after the great white but watching her cruise slowly towards us it was hard to imagine.

Tiger sharks are the second most dangerous predator after the great white but watching her cruise slowly towards us it was hard to imagine. About five metres long, this pregnant female was huge. She came up to one of the dive crew and he casually passed a fish head into her mouth as she glided by. Unbelievable to watch. She circled around and again took a fish head from his hand. This time he gently rubbed her nose and underneath her mouth. She was shortly joined by another tiger shark, not quite as large but equally impressive.

For about 20 minutes we watched them swim around our group, taking fish heads each time. The tiger sharks gave us a magnificent performance and one that we will not forget in a lifetime – an awesome experience. For scuba divers we would thoroughly recommend this amazing experience and the Beqa Lagoon Resort. So, what’s next on the bucket list?