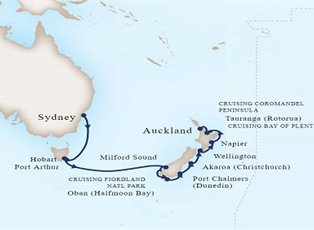 Maasdam   (More about the ship)

BONUS:
- Reduced fares*
Please note: while prices are accurate at time of loading they are subject to change due to currency fluctuations and currency surcharges may apply. Please check price at time of booking.

*Valid for sale until 23 Jan 2020, unless sold out prior. Prices are per person twin share in NZD, based on best available fare inclusive of all taxes, fees, port expenses and all applicable discounts. Valid for new bookings only. Advertised fares are available until allocation is exhausted and may fluctuate during the campaign period. Fares and deposits are non-refundable and final payment is due within 24 hours of booking. Supplements apply for higher room grades, categories and fare types. Gratuities and airfares are additional. Subject to currency fluctuations. All fares and taxes are subject to change until full payment is received. Itineraries are subject to change. Cancellation penalties will apply. Offer is not combinable with groups, View & Verandah promotion, or other major promotional offers. Other restrictions may apply. Whilst all information is correct at time of publication, offers are subject to change or withdrawal without prior notice. Further condition apply.