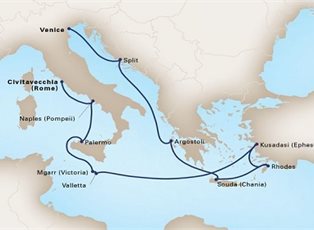 Nieuw Amsterdam   (More about the ship)

12-Nights accommodation aboard the elegant Nieuw Amsterdam
Superb dining with all meals included during your cruise
Additional Dining options; Pinnacle Grill (US$39 per person), Canaletto (US$15 per person), Tamarind (US$25 per person)
Entertainment and activities while cruising
Kids Club for 3-17 years old
Choice of bars throughout the cruise
Cruise, port charges and government taxes
Please note: while prices are accurate at time of loading they are subject to change due to currency fluctuations and currency surcharges may apply. Please check price at time of booking.

Cruise costs are in New Zealand Dollars (NZD). Offer subject to availability at time of booking. Prices are per person share twin based on best available cruise fare, inclusive of all discounts unless otherwise stated. Subject to availability and currency fluctuations. All fares and taxes are subject to change without notice up until full payment is received. Itinerary may be subject to change. Credit card payments will incur a fee. Cruise deposit, amendment and cancellation conditions apply. Travel agent service fees may apply. Special conditions apply - please ask for full details at time of enquiry. Cruise Line reserves the right to re-instate the fuel supplement for all guests up to US$9 per person per day if the price of light sweet crude on the New York Mercantile Exchange (NYMEX) exceeds US$70 per barrel. Please consult cruise line website for current information.