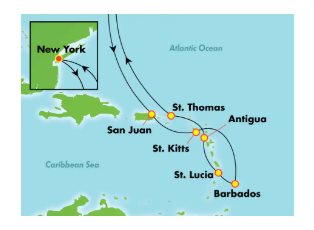 Norwegian Gem   (More about the ship)

Bonus:
- Book an Inside stateroom & choose either a FREE Beverage package, US$50 Shore Excursion credit per port, an Internet package OR a Specialty Dining package, OR, book an Oceanview & choose 2 offers, OR, book a or Balcony stateroom & receive all 4 offers*
Please note: while prices are accurate at time of loading they are subject to change due to currency fluctuations and currency surcharges may apply. Please check price at time of booking.

*Valid for sales from 10 Feb until 28 Feb 2020, unless sold out prior. Prices are per person, twin share in NZD based on best available fare, inclusive of all discounts, port charges, taxes and gratuities. This excludes gratuities or service charges for any purchases guest may make on board - including but not limited to beverages, specialty restaurants, spa services etc. Prices are based on cash or cheque. Subject to availability. Prices shown here are not shown in real time. While we endeavour to keep our pricing as up-to-date as possible, the advertised prices shown here may differ from the live prices in our booking system. A non-refundable cruise deposit is due within 3 days (by midday) of reservation. Full cruise payment conditions apply. Main meals are included at selected restaurants only. Guests booking interior staterooms may choose one offer, guests booking oceanview stateroom may choose two offers & guests booking a balcony stateroom receive all four offers. BEVERAGE PACKAGE: Applicable to guests 1 & 2 & must be at least 21 years of age at time of sailing to qualify for the Premium Beverage Package. Guests under 21 will receive the soda package. Beverage package is valued at US$99pp, per day & includes a variety of spirits & cocktails, wines by the glass & bottled or draft beer up to US$15. Exclusions apply. SHORE EXCURSION CREDIT: Credit is per stateroom, has no monetary value & is non-refundable. Applicable for each port, including debarkation port, & is not transferable to other ports. Use the credit or lose it. Does not include embarkation ports. Overnight stays count as one port. INTERNET PACKAGE: Receive 250 minutes per stateroom, including activation fee. Internet will be applied to the 1st guest in a stateroom. One login per stateroom. SPECIAL DINING PACKAGE: Package is on a per meal basis for guests 1 & 2 with a maximum of 3 meals for cruises 7-8 nights, a maximum of 4 meals for cruises 9-10 nights and a maximum of 5 meals for cruises 11 nights or more. Further conditions apply, check at time of booking. Prices/offers are subject to change or may be withdrawn without prior notice.