Cruising Through the Magnificence of Europe

Over the last seven years I’ve become a bit of an APT junkie. I have sailed with them on the Rhine in Germany and the Douro in Portugal and the Rhône and the Seine in France.

My all-time favourites are the Rhine and the Danube, which are connected by a 171-km canal in Bavaria. Extending from Rotterdam in the Netherlands to the Danube Delta on the Black Sea, the 2,850km river system is like State Highway One running through the heart of Europe. I’ve been fortunate enough to have sailed it four times with APT and each time there’s something along the way that still leaves me speechless.

'There is no right or wrong way to do the cruise, but I prefer departing from Amsterdam and finishing in Budapest so I can have a few extra nights in my favourite city.'

The Rhine is one of Europe’s most important rivers. For nearly 2000 years it has served as a vital trade route between central Europe and the sea. Countless villages sprawl along its banks, backed by scores of vineyards and fertile farmland. These days the best way to view the Rhine and the Danube is on board an APT river cruise. APT offers a big range of all-inclusive options including local guided sightseeing; APT Signature Experiences such as a visit to medieval castles like Namedy (Andernach) in Germany; a cocktail reception and concert at Vienna’s City Palace, and a ride on the Grand Empress Steam Train in Hungary. All meals, beverages and gratuities are covered, and there is a huge range of airfare options including Fly Free, Air Credits, Companion Fly Free, and more.

There is no right or wrong way to do the cruise, but I prefer departing from Amsterdam and finishing in Budapest so I can have a few extra nights in my favourite city. On the way to Budapest on my most recent trip last year – on APT’s 15-day Magnificent Europe voyage from Amsterdam to Budapest – I enjoyed some top sights that are all-inclusive with APT. 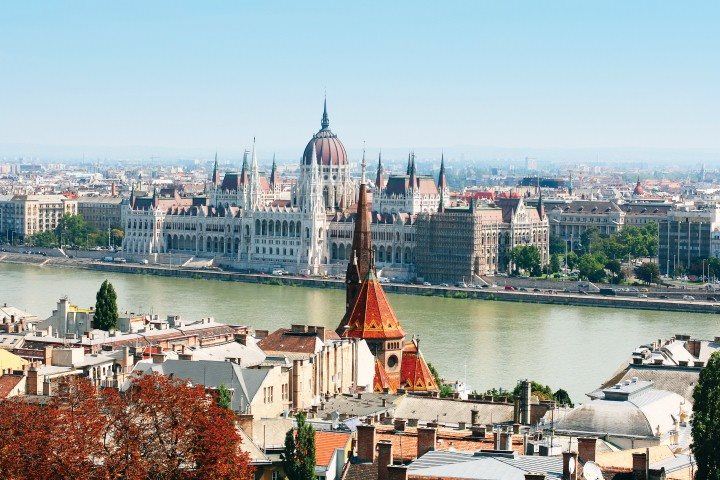 On day four of our cruise we docked at Rudesheim on the Rhine. APT offers two options here, one being a tour of Siegfried’s Mechanical Musical Instrument Museum in the town which showcases 350 instruments dating back three centuries. Think delicate music boxes, one with a chirping bird on top, or massive pipe organs and pretty much everything in between. The guides are excellent and the collection is large. Prepare to be amazed because it is a great place. Following your tour, why not jump on the gondola to the mountaintop for some exceptional views over the Rhine Valley?

Day seven saw us in World Heritage-listed town of Bamberg in northern Bavaria where a local English-speaking guide took us on a walking tour of the Old Town. APT offers three different-paced walking groups from Easy to General to Active so there’s an option for everyone’s fitness level. On our walk we listened to the story of how the old Town Hall came to be built in the middle of the Regnitz River, marvelled at the 1000-year-old Bamberg Cathedral and afterwards tried one of the area’s speciality smoked beers.

'On our walk in Bamberg we marvelled at the 1000-yearold cathedral and afterwards tried one of the area’s speciality smoked beers.'

On day ten we arrived in Passau on the border with Austria and were spoilt for choice. There was the option of staying in Passau and exploring “The City of Three Rivers” with a guide; travelling to Salzburg in Austria for a tour and sights from the classic film, The Sound of Music, or another crossborder tour to Cesky Krumlov in the Czech Republic. Having done all three options previously with APT, I chose to return to Cesky Krumlov, a beautiful city in the South Bohemia region that feels like a fairy tale from the Middle Ages with quaint houses, cobblestoned streets, a meandering river and a grand castle. The full-day trip will have you wanting to return for another visit as it did for me.

At the end of my cruise in Budapest, the best was left till last. Here the Danube slices the through the city, separating the ancient hillside district of the city known as Buda from the boulevards of modern Pest. Your APT ship will moor close to the Chain Bridge, one of eight bridges linking the halves of this fascinating city. An inclusive APT city tour takes in Heroes Square, a monument which celebrates a thousand years of Hungary’s existence with a Chariot of War, a Chariot of Peace, the Archangel Gabriel on top of a pillar, along with statues of kings and chieftains. Also memorable is Fisherman’s Bastion, a panoramic viewing terrace with stunning views back across Pest and the Parliament buildings on the banks of the Danube.

'New in Budapest with APT in 2019 is an exclusive (and inclusive) journey on the Grand Empress Steam Train with its evocation of the rich and romantic life of Empress Elizabeth of Austria- Hungary (1837-1898).'

I have to add that new in Budapest with APT in 2019 is an exclusive (and inclusive) journey on the Grand Empress Steam Train with its evocation of the rich and romantic life of Empress Elizabeth of Austria-Hungary (1837-1898). This includes a welcome reception at Budapest Station’s Royal Waiting Room, a traditional game lunch on board and a guided tour of her beloved Godollo Palace. APT really does think of everything!

There are of course many more unforgettable adventures on APT’s Magnificent Europe cruise from Amsterdam to Budapest, and topped with the luxury of the company’s river cruise ships, its exceptional customer service and all-inclusive amenities and tours, you are guaranteed a holiday of a lifetime.

I have just rebooked my cruise group for 2020. Who is going to join me?